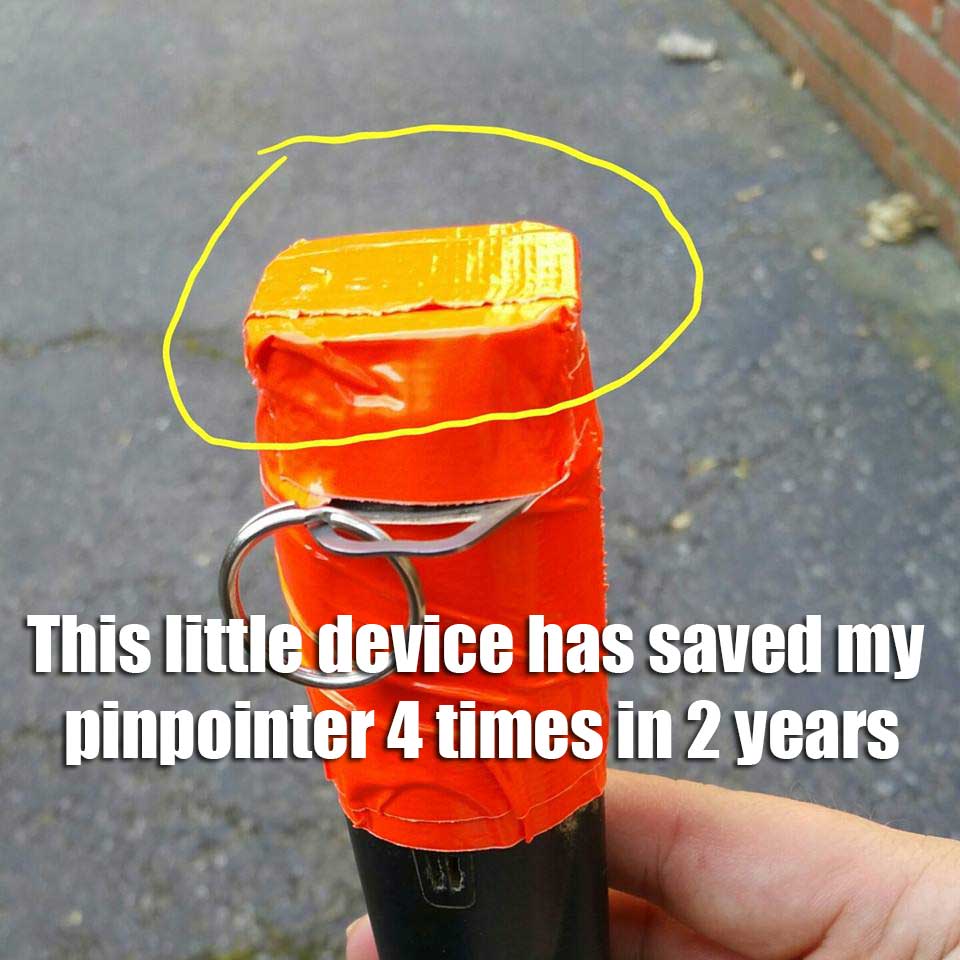 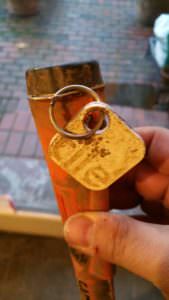 Beat up and working great. I have a second generation Tile on my Garrett Carrot. Since the pinpointer is orange, and the device was louder, I didn’t cover it with tape this time.

Somewhere in Jessamine County, Kentucky, there lies a Garrett Pinpointer.  Lost in 2012, it is surely ruined now by snow, rain and ice.  And perhaps was eaten or smashed by a cow.  Or something.  At $120 a pop, these things are not cheap – and losing something like this can disrupt our precious detecting time.  I did not have my GPS “breadcrumbs” app (HandyGPS) at the time and wasn’t finding much (few GPS location recordings.)    I looked for 2 hours and had to leave as the sun went down.  I returned the next day but it was no use – I had covered miles.

When I started using Tiles as a car key finder on my keyring,  I wondered how useful they might be for metal detecting equipment.  Being electronic inside, I expected adding them to a pinpointer or shovel would destroy them.  Metal detecting can be brutal on gear, and pinpointers get banged around a lot.  But I had an extra Tile GPS Key Locator from a multi-pack I wasn’t using yet, and figured I’d try it.  As of this writing, 2 years later, I have left my pinpointer behind a total of four times, yet to have one fail me.

The Tile connects to your smartphone with something called Bluetooth Low Energy (LE) so it doesn’t have much effect at all on batteries.  The Tile has a lot of features that don’t apply to my use in the metal detecting field – such as “crowdsourced” finding, where others using the Tile  app form a network so you can use all of their phones to search for your object also.  But for keys, wallets, etc. where you’re around a lot of people, a large user-base can make a difference.

Finding Your Gear with the Smartphone App

The first time I lost the pinpointer with the Tile attached, I was in a civil war camp site where the grass was knee-deep.  Walk 5 paces from your hole and you could not see anything left behind.   I had walked 200 yards or so before I realized the pinpointer was missing. 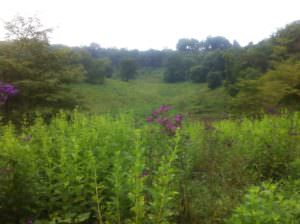 My pinpointer is out there…. somewhere.

I fired up the Android Tile app, which showed me the last place via GPS that the pinpointer was in range.   I simply backtracked to that point and walked straight to it in the grass.

Durability Blows Me Away

What impressed me most, and keeps me buying Tile-brand (over the up and coming competitors) is the durability this demonstrated.  When my older pinpointer died (after thousands of hours) I moved the tile to my new orange one.  After I had it a year, I replaced it with the 2nd generation version which is louder. 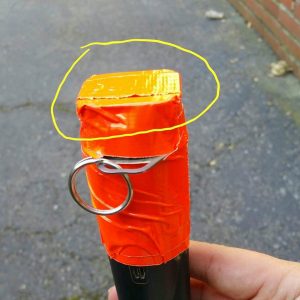 I then discovered that the Tile worked best as an “extension” to the top of the pinpointer like this. Yes, I have to replace the tape when I change batteries in the pinpointer, but I don’t mind.

As I write this, the story above has repeated itself 4 times, and every time I’ve walked directly to my pinpointer or shovel and  then on with my day.

Tile needs a mode where you can get a “left behind” alert, using something called “GeoFencing.”  You should be able to bind your phone to a Tile (say, for 24 hours, or a week, or whatever) such that when you leave it behind, the phone will “Push Notify” you as you walk away from it.  That would save even more time, and lessen the chances of your forgotten item from being taken by someone.

Time-based alerts are important:  I don’t want to be alerted to leaving the Tile behind every time I go to work in the weekdays, but when I’m detecting I want to tell the Tile App that for the next “X” hours or days, it should alert me.  I’d use this during detecting hunts and business travel. Some of Tile’s less-durable competitors have this, and I’m hoping Tile does this soon.

The Tech is Better Than Ever

The New tiles are even smaller and louder, and when my battery dies in the ones I’m using, I’ll just “Re-tile” with newer ones.  Don’t mess with what works.  Someday I’ll bet that equipment will come with built in locators – or at least a slot to put one in.  Until now, I’ll wrap with orange duct tape.

UPDATE:  Tiles now have replacable batteries and 2x the range!

Not a paid review

I received zero compensation, in any form, for this post – it’s my honest opinion.  I paid for my Tiles with my own money at retail.

If you’re planning to buy a Tile or four consider using this link to support my website.  Be sure to let me know when it helps you!

You may also find this post about use of Bluetooth on Archaeology sites interesting. 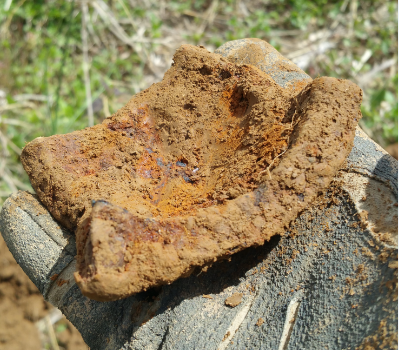 Calculating the Diameter of a Cannonball from a Fragment 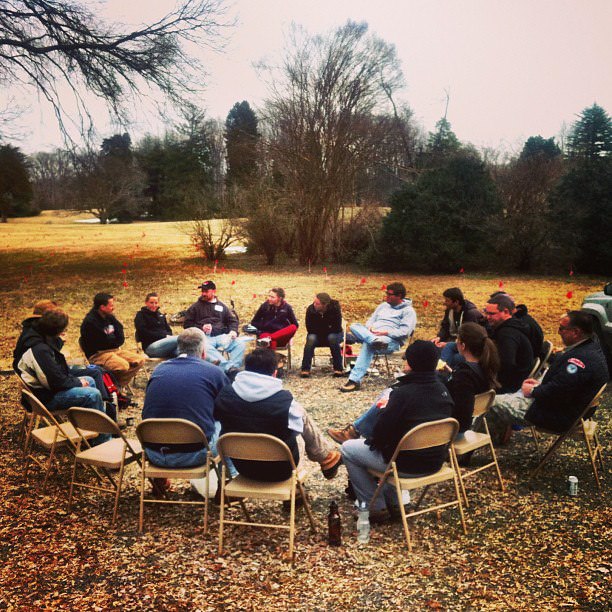 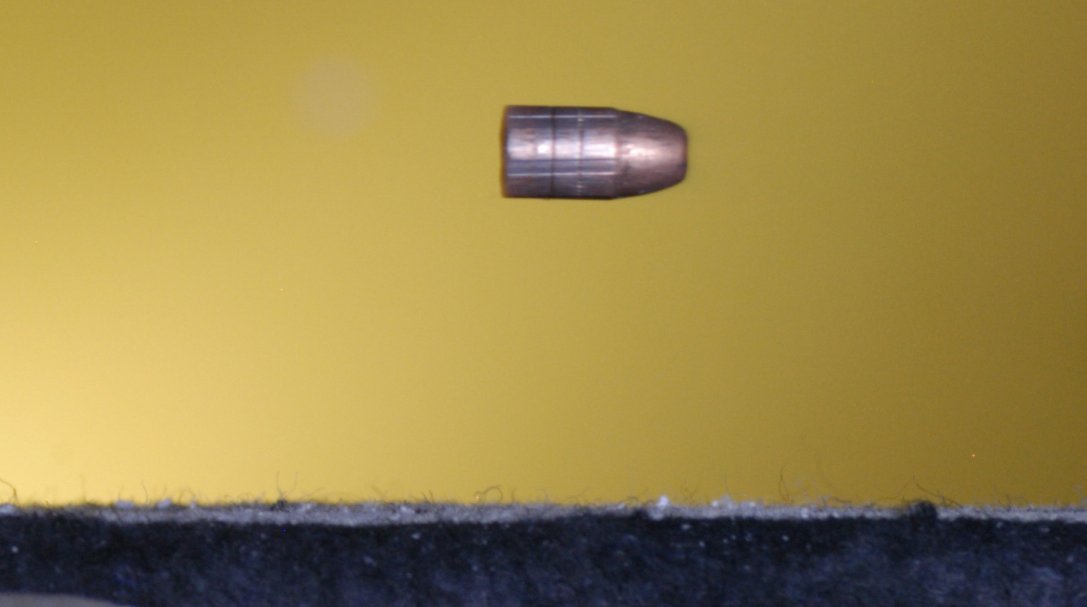 Thought Experiment: Could a metal detector detect bullets in the air? 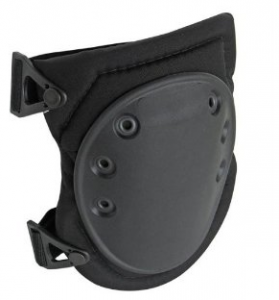