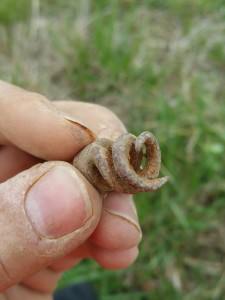 I wanted to show this amazingly great condition musket wipe, apparently lost in the chaos of a major artillery engagement.  These were attached to the end of the steel ram-rod and . used to clear debris from the barrel, such as paper wadding that had not been expelled. Some worm designs were sturdy enough that they could be used to remove stuck ammunition. The worm could also be used with a small piece of cloth for cleaning.  This one did not include the screw (or I would have called it a “screw and wiper”) which is a multi-tool for clearing ammunition and cleaning.  Someday I’ll find one of those!

Rules for the Management and Cleaning of the Rifle Musket, Model 1861

“It is not essential for the musket to be dismounted {disassembled} every time that it is cleaned; for, after firing it in fine weather, or when there has been no chance for the wet to get between the barrel and the stock, it can be perfectly cleaned in the following manner.

Put a piece of rag or soft leather on the top of the cone, and let the hammer down upon it; pour a gill of water into the muzzle carefully, so that it does not run down the outside; put a plug of wood into the muzzle, and shake the gun up and down, changing the water repeatedly until it comes out clear. When clear, withdraw the leather, and stand the musket on the muzzle for a few moments; then wipe out the barrel (as given in the second rule for cleaning {see below}), and also wipe the exterior of the lock and the outside of the barrel around the cone and cone-seat first with a damp rag, and then with a dry one, and lastly with a rag that has been slightly oiled. In this way, all the dirt due to the firing may be removed without taking out a screw.

2nd. Screw the wiper on to the end of the ramrod, and put a piece of dry cloth, or tow, round it, sufficient to keep it from chafing the grooves of the barrel; wipe the barrel quite dry, changing or drying the cloth two or three times.

3d. Put no oil into the vent, as it will clog the passage, and cause the first primer to miss fire; but, with a slightly oiled rag on the wiper, rub the bore of the barrel,… and immediately insert the tompion into the muzzle.”

Found with XP Deus in Kentucky