Warning: array_merge(): Expected parameter 2 to be an array, null given in /home/customer/www/detecting.us/public_html/wp-includes/load.php on line 40
 Don't Let Rallies "Ransack" Detector/Archaeology Cooperation
Menu
Home > Advocacy > Don’t Let Metal Detecting Rallies Impact Detectorist / Archaeologist Cooperation
This is a response to the thoughtful protest post by Craig Swain about DIV (Digging in Virginia) metal detecting rally at “Ransack a Historic Site”  – I’m focusing more on the rallies in general than illegally hunting beyond their defined borders.
I have long wondered about the impact of metal detecting rallies like DIV on perceptions of metal detectorists both with Archaeologists and the general public.   I’ve been invited by friends and politely declined each time and may never be invited again after penning this post.  As I watch social media, and see the DIV finds, smiling faces and good times scroll by my screen, I do feel a bit of jealousy, but I’ve just never felt I could participate in good conscious.   I would have trouble “looking my Archaeology friends in the eye” after being part of such a massive event where little, if any, provenance is captured and most finds go into private hands, never to be accessible by others again.
Rallies, in many ways, an extreme example of what Archaeologists hate about the metal detecting hobby – destruction of contextual information en masse.  [see update below about Swedish rallies]

Archaeologists will want the rallies to be made illegal or cancel them.  Is this realistic?   I’m proceeding here assuming it is not realistic on private land, and we need to find ways to incorporate context collection and curate finds as they continue. 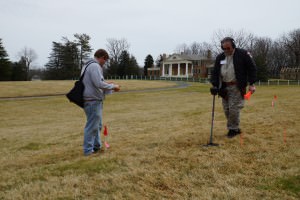 A detectorist and Archaeologist working side by side at Montpelier

Finding an acceptable approach to recording provenance is very difficult in a rally environment, but I do have ideas, some of which will become more realistic as technology improves.  Rallies are about the fast-paced thrill of finding items on historic land among your friends.

As a certified geek, I have high hopes that in the forthcoming years, field devices such as 2cm smartphone GPS  or directional bluetooth integrated into cell-phone based site forms will facilitate better, more effortless amateur data collection when a professional is not available.  I am constantly testing new ideas like this – even voice data entry!  But even after employing my best ideas, I still spend 30-50% of my time in the field working on data collection, organization and publishing,  while my metal detector sits idle.  One detectorist called it “burning daylight for data nobody will ever look at.”  Doing this work takes a real commitment from the detectorists and willingness to enjoy their hobby differently – to find their thrill in contributing to a bigger dataset beyond what’s in their finds bag. 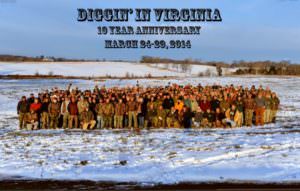 Official DIV 2014 Photo by Rick Martin via Touch the Past blog.

One impulsive thought would be to pair each metal detectorist with someone in charge of recording provenance, sort of like our metal detecting sessions at Montpelier.  I’m afraid this would be considered intolerable at a rally.   Participants have paid fees, scraped together precious vacation days and driven miles for this much anticipated event, so asking them to spend 30-50% of their time filling in forms or waiting for analysis is probably not what they had in mind.  Pace matters at DIV since an impressive display of artifacts is a great source of personal pride at the end-of-event exhibits. 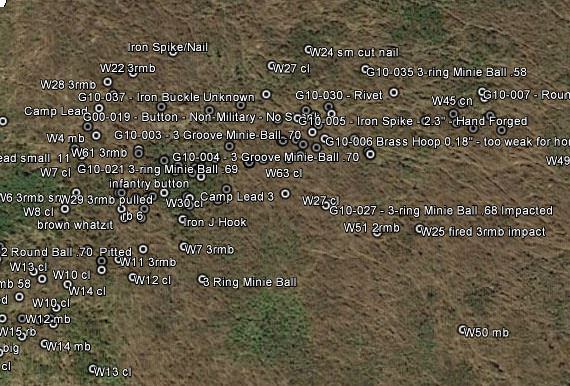 Some of my data gathering (solo hunting) BadElf +/- 1m GPS capture + Geotagged Images + ImageSetter results from Civil War Camp.  I spend over 1/3 of my time documenting everything, which is then published and curated into public-ownership archives for loan

I do have an idea that could work at Rallies where professional collaboration isn’t possible. – something like the HandyGPS  smartphone app allows simple geo-tagged photos to be automatically saved in a special folder that can easily be grabbed later.  When the participants connected to the phone network, the app could synchronize data from all participants into a gallery with geotagging.  A software like GeoSetter could process the images, extracting and using their location information to add them to a map, where an exportable file (KML?) could be shared with scholars.

UPDATE:  Please see this post from ScienceBlogs by Martin Rundkvist in his Aardvarchaeology column.  A great refreshing read on how a rally was conducted in Sweden.  I had no idea it was so organized!!

Ask detectorists to avoid such massive artifact removal events so that future archaeologists can properly excavate someday-maybe, and detectorists (correctly) refer to warehouses of boxed artifacts collecting dust in curation backlogs – never to be properly appreciated or accessed for any reason (until they’re eventually victim of a budget cut or accident.)

The question is …why not “save” the artifacts now by people who will appreciate them before they “rot in the ground?”  When would the finds they are recovering in the excavation in the future be available to the public in a professional-only scenario?  While I see a lot of cooperation happening on smaller, Archaeologist-lead projects – cooperation on rallies is likely impossible without some changes.

Archaeologists are sometimes bad about using extreme examples such as DIV as their primary examples of non-professional destruction by detectorists.   Referring to rallies as examples of “typical” detecting behavior is tempting and inaccurate.  I hope rallies do not poison the well for detecting rights and future cooperative projects with professionals.  We already see the potential of better training and more open-mindedness on collaborative projects and this is something I hope we can all rally around.

Deprecated: Directive 'allow_url_include' is deprecated in Unknown on line 0