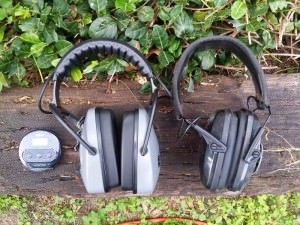 It wasn’t long after I bought my Deus that I realized I needed some full enclosure headphones.  I was hunting an old Odd Fellows’ Home in KY that was next to a busy roadway.  The WS4 headphones for Deus are lovely in a silent field (even with a big sun hat!) or in the woods with friends, but here, they leaked sound badly.  I also knew this winter I would also be missing my full size phones so I made a couple of calls.

I received two pairs of headphones for the Deus (both accepting the XP headphone wireless unit.)  First, the Gray Ghost units from DetectorPro and second, Vance’s Headphones for XP Deus from Vance’s Detectors in Kentucky.  I’m a customer of both and have no financial incentive to write this review… I don’t owe any favors, beer, permissions or anything else to anyone.  The Gray Ghost headphones for Deus were provided as evaluation units, and I bought the Vance headphones with my own money.   The WS4 Headphones for Deus came with my machine.

The “backphones” are extremely lightweight so very good for hot weather.  You can carry on conversations wearing them and wear a sun-hat (awesome for field hunts.)  Some users don’t like the way they press on the backs of the ears, but I grew used to it.    At first, I thought they felt flimsy but realized that they were just very flexible.  They fold down to nothing in the pack.   Since they are so well known, and most Deus owners have them, I’m not going to go in depth.  But fore the person considering the Deus purchase, they are included here briefly. 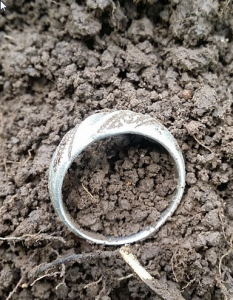 Found with Vance phones in a hunted out area.

I had around 20 hours on the Deus using the backphones, and had become used to the tones.  I could tell when things were deep, high conductive and more.  As other Deus owners know, tones are everything and subtle tones are critically important!  The subtle differences between a coin’s edge and bottle cap can save lots of frustration.  The backphones have a nice dynamic range – high pitches were high, the low tones were rich.  They have spent money on good speakers in these things, despite their small size.

But the backphones do not block ambient noise much at all.  If you want to hunt in a noisy place, it’s going to be difficult to hear the deep targets.

But let’s move on to the full size phones most of you are here to see.

I want to thank DetectorPro / Detector Electronics for supporting detectorists like they do with evaluation units.  Gary and Michael were great to deal with and generous with their time.   I was and am a DetectorPro fan.  They have always had a fantastic reputation and solid no-questions-asked warranties on their products.  I own 3 pair of their headphones for my other machines and wouldn’t trade them for anything.   Ask anyone what they think of their Ghost wired phones and they’ll tell you how much they love them.

Unpacking these phones, I realized right away that they were the same, beefy construction as the other Ghosts I’d owned.  Everything was a high quality, heavy plastic, folded nicely (but not completely with the receiver on.)   They felt great in the hand, substantial but light.   And the earpads were wonderfully plush!  The build quality was excellent and like my others, I knew they would take a beating.  Not too stiff, not too soft.  The XP receiver slipped on the holder with a click.

Comfortable is the word, these things are plush!  I could wear them to bed.

They are also incredibly comfortable in the field.  Some cheaper headphones press against your head in bad ways, or they’re difficult to wear with glasses.  These are, for lack of better word, plush with comfort. 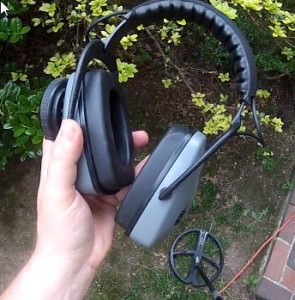 I had decided to use the Ghosts on an all-day hunt back at an 1840’s location in Bourbon County KY where the targets have been around 7-8″  in past hunts with the E-trac.  I have several programs on my Deus, but the one I Favor at these KY sites is an 8kz, full tones, reactivity 3, silencer 1, sensitivity 85, discrimination 10… at this site, my notes show a ground balance manual at 81.  There was lots of iron.  Slipping on the Gray Ghosts, the ambient noise vanished – these things are QUIET!   Even near a busy roadway, lawnmowers, airports, barking dogs, whatever, you will have no problem hearing your machine.  They claim a -25db attenuation of ambient noise and I believe it.

I fell in love with the Ghosts’ Comfort, but they fell flat in the most important feature.  Their ability to transmit subtle tonal differences.  Nobody was more disappointed than me.

The Ghosts didn’t sound nearly as good as their wired cousins (I own 2-3 other pair of GGs)  I tried them in Basic 1, Basic 2 and 4-tone factory programs.  I tried full tones as well.  In all, they sounded muffled,and the distinctive differences between tones is poor compared to any of the stock XP phones.   I found myself turning up and down the volume on the Gray Ghost headphones trying to find a sweet spot between too loud and loud enough.   I tried manually moving the tone frequencies in expert mode but I could not get the range of the backphones.

I wondered if I had a bad pair, but I looked online that evening (ears ringing) and was not surprised to see other people saying precisely the same thing….  Still, I made the effort to call DetectorPro and see if there was a problem with the phones I had or if they’d like to swap them out.  They insisted that customers were loving them, and there was no need to try a second pair.  A few detectorists on Facebook groups I frequent also sang their praises.  Gary points out that tones are a subjective thing based on preferences.

Vance Muffs Headphones for XP Deus – Great Tones, Pretty Comfortable…. but I struggle to wear them with my XXL head*

After some conversation about the Grey Ghosts, Vance sent me a pair from a new “Vance Muffs” shipment he received of these (These look like Chefphones from the UK, but they have a different, higher quality speaker.  Vance said he tested 27 different speakers and 13 different ohm combinations – and that he was essentially building the headphones he wanted with the Deus.

The glossy black headphones look very different from the Gray Ghosts and maintain a lower profile on the head.   The head strap, hinges, cable and assembly quality is heavy duty and durable and they grip your head with comfortable authority.   I have personal experience with Gray Ghost wired headphones taking a real beating, but with the Deus, I’m much less likely to be throwing these things around with a $300 receiver on the side!   The VM padding is slightly stiffer than the GG’s, but every headphone I’ve owned has softened somewhat with age… and sweat.   I found their lower profile less likely to catch on branches (an issue when the receiver is sticking onto the side.)  And, though it doesn’t matter as much, these look far less “geeky/nerdy” to me. 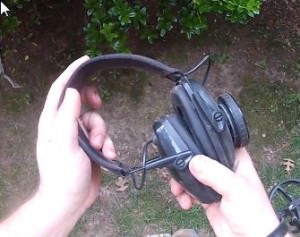 With all three in hand, I went out to my coin garden and tried them out side by side.  I could not believe how different they were.   The Vance Headphones have the full dynamic range and a rich crisp sound in all modes I tried.   The comfy Gray Ghosts were loud but had none of the audio ID capability these have.  The difference, to me, is HUGE.  My buried rusty bottle cap at 6″ sounded identical to the buried silver dime a few feet away on the Ghosts – like someone hitting the same key on a piano twice – no difference.  With the Vance phones and Backphones, I could hear the difference without a doubt.  Rusty targets have a fuzzy sound on the edge, while coins and such is more distinct and bright.  It’s a bit hard to explain but it makes the difference in the field.

The sound was rich, crisp, like the WS4 but with the appx -25db of ambient noise reduction.

I had permission to hit an 1817 home/farm across the Kentucky river and set off early.  I took lunch and planned to hunt from 9-6.  I wore the Vance phones the whole day.  I’d say they were 80% as comfortable as the Ghosts in terms of padding.   What made the hunt go so well is the sound quality.  I could hear the slightest peep, the pinpoint mode didn’t slam my ears.  Volume was very consistent for all tones.  I don’t think I touched the volume dial all day, leaving it at around 5 with a volume gain of 2/5 so that older deeper targets could be picked out.

With the Vance phones and the Gray Ghosts, you can kick one ear up to the side of your head for more social hunts (or, as we discussed, when you might encounter a rattler or hornet’s nest!)   However, Vance Muffs are better for this…they are very comfortable stay in place…the GG’s don’t feel as good and slid down for me.  I realized it’s the type of hinge he uses which allows for this articulation.

I think Vance phones could use more padding in the muffs – basically so that they are thicker and more plush.  As they wear out, the padding on any headphone will compress and flatten.

Vance tells me that his phones may change in appearance slightly as he gets his logo on them, but the construction and speakers will not.  He also tells me that if you don’t like the phones, send them back.

[edit: I’ve had some pushback on this video by GG owners – so your mileage may vary.  It’s hard to capture the difference between them on video – but this does get the essence of it.] 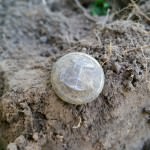 Headphones are Somewhat Subjective – But Consistency and Subtle Tones are KEY for success on the Deus!

Some people prefer the sound of vinyl over CDs.  Some love the sound of a diesel over a V8.  Some enjoy jazz, others enjoy metal.  Sounds are subjective.  But with a metal detector designed around tones (e.g. the Deus) the headphones must faithfully provide a full dynamic range to give your brain what it needs to decide on digging targets (click for a post on Deus consistancy!)   We develop a sixth-sense – a sort of subterranean vision, after 30 or so hours hunting with a given machine and a few hundred targets.  The headphones become our eyes – the interface to our brain.   But I think the differences in the two are more than that… I think they affect success in the field.

Pulled from the IRON

For heat, quiet fields and social hunting the Deus backphones (WS4) are wonderful.  They have a great dynamic range well matched to the Deus.  But they do not block ambient noises.  You can hear your pinpointer better with these and you can wear a sun-hat in open spaces.  Seriously, these are well made.

For noisy environments, cold weather, or deep target hunting, the Vance headphones win this one.  I was super impressed by these and have been hunting with them for several more hunts.   You can prop them up nicely for one-sided listening, and you can be sure you’re not missing the subtle tones the Deus provides. 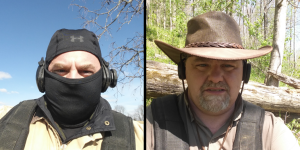 My setup: Vancephones in winter, WS4 backphones in summer.  You can’t do this with the WS5 phones unless you buy another control unit or use wired phones in Summer.

They are fantastic, but the control unit does not come off for use in backphones in Summer.   Excellent in cooler weather, but in Summer, they’re hot and expensive.  I prefer the convertible capabilities the separate unit. 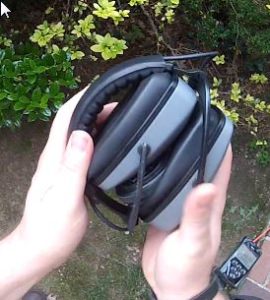 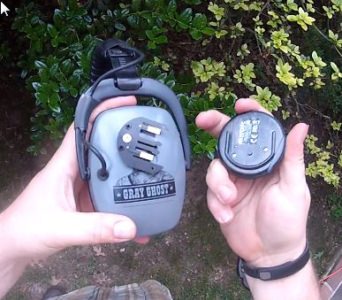 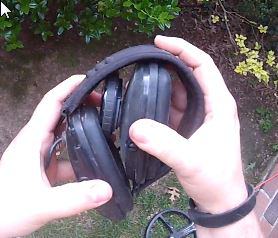 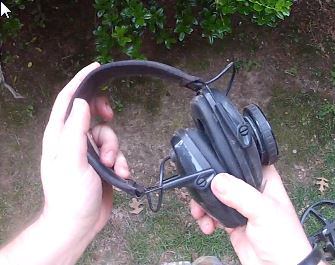 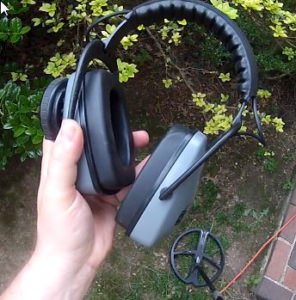 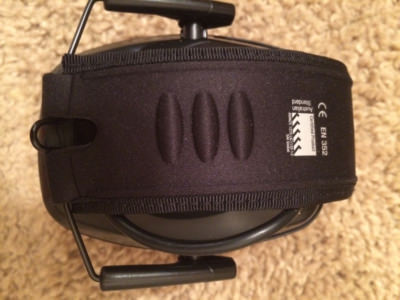 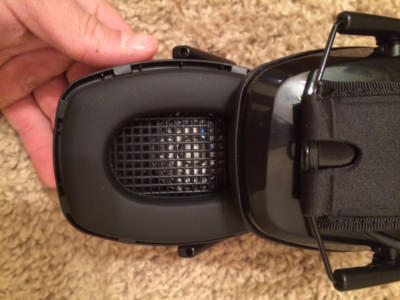 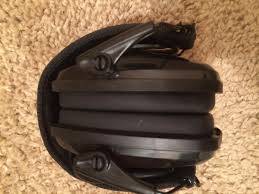 Check out my other equipment reviews.