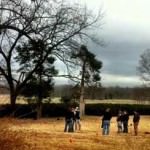 I have always meant to try a harness for hunts where I planned to swing my heavy E-trac (with probe) all day.   I’m horrible about changing arms and so my right shoulder would get inflamed tendons and fatigue quickly.   I’d feel great except for the shoulder, and skipped or ended some hunts over it.  The “nail apron and screwdriver only” crowd will not like any of these – and owners of very lightweight detectors probably don’t need them either.

I decided to do a shootout among the most popular detector swinging aids on the market over the course of 10 hunts during the month of August and September 2013.   All hunts were done with my Etrac and one of three coils at 1800s farmsteads including a mix of lawn, field and woods hunting.

I wanted to make sure that I wasn’t just being a gadget-freak or fanboy.  If the product wouldn’t truly help me enjoy the hobby more, I didn’t want to use it.  So I considered the type of hunting I do… farmsteads, woods, old homes and whether I’d enjoy myself more and bring home more great finds.

I try to avoid any external influences in my decisions.  I purchased products with my own money, and was not compensated or influenced by any manufacturer or retailer.   The ProSwing was provided as a loaner from my friends at Minelab, but I am purchasing it from Minelab at normal cost so I can keep it. 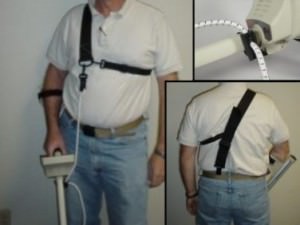 The swingy thingy is very simple, and doesn’t require a harness.  Essentially it’s a strap, buckle and bungee cord.   To use it, you simply adjust the strap, clip it to your pants/belt on the back side and attach the bungee to your detector.  Adjusting the bungee for the right height is pretty much the only tweak required.    I used it for two hunts and was always glad to take it off, sadly.      (note:  They now have a Swingy Thingy Ultimate, which I did not test, but it looks to be a more padded version of the original.) 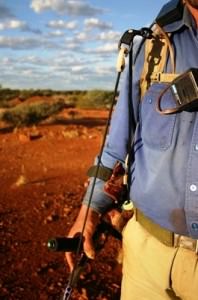 The Hipstick is an innovative product that transfers the weight of your detector to your hip (belt) via a strong resin rod.  The belt connection has a ball joint to allow the rod to pivot  and a small bungee is meant to hold the ball from coming out of the joint.  The detector is attached using the same bungee system as is used on the Swingy Thingy, with plastic clips.    I used the Hipstick on 3 hunts, one of which was all day.   It does require a harness of some type, I used my Camelbak with a large climbing clip. 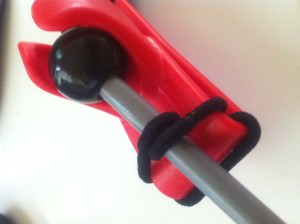 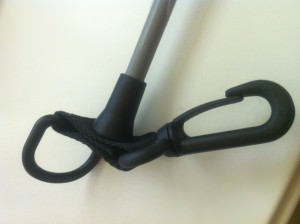 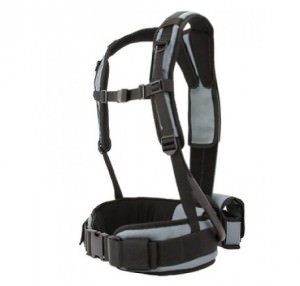 When Minelab came out with their ProSwing, I initially was unimpressed.  It looked ungainly, bulky and would require me to change how I carry items on my belt.   Then I started to see others I respect using it, and had to give it a try.   The Minelab product consists of a high quality harness with padded belt and lots of adjustments.  Along the side of your choosing you thread a resin rod, which pops into receptacles along the strap and rear of the unit.  The shaft, which is nearly invisible during use, transfers weight from the connect point at the top to the belt, relieving your shoulders, neck and arm from carrying the detector.  I used this on 4 hunts for this review.  But the reality is that this is now I plan to use it for every hunt from now on. 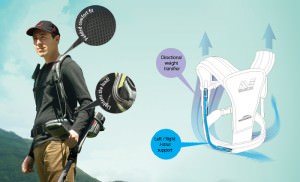 If you use a heavy detector, you will come to love a harness if you like to hunt all day.  If you use a lighter machine, they may just be a bulky pain in the butt.  As an E-trac user, I’m a convert.  I enjoyed my hunts longer and was less sore later with the Hipstick and the Minelab Harness.

I’ll just say it… the Swingy Thingy is simply out of its league here.   It provided none of the comfort benefits of the other setups based on my hunting, always feeling as if it was fighting my swing.   I tried hard to love it, but ended up just taking it off and swinging as usual.  The only time I can think of using it is if my shoulder is worn out at the end of the day and it’s either use it or stop detecting.   The Swingy Thingy made me MORE sore than if I were using just the detector, only the soreness went into my neck.  I did try adjusting it many times, and even switching sides.  I just ended up putting it in the car.   It could be much better on other metal detectors, but with the E-trac I’m done with it.

If you’re a thin person, like the Aussie in their video, and you don’t mind some awkward unclipping,  the Hipstick might be for you.  It’s brilliantly designed in concept, but when I tried in in the field it became a pain at times.  Still, it does improve the comfort of hunting a lot through the weight transfer, so I tended to put up with the ball joint and unclipping hassles anyway (at least until I got out the Pro-Swing.)   If you’re hunting fields where the signals are far between, it would work fine I think.   If the ball joint were attached to some type of belt-mounted holster (rather than the awkward plastic clip they include) and you used it with the Minelab top-adjust bungee, it might be much better.   Having the ball joint right on the belt is an issue for me.  If it were held out, perhaps 3-4″ I think it would work 100x better.

The Minelab Pro Swing  is the kind of accessory that helps you enjoy your hobby more often and look forward to the next hunt, meeting my main criteria.  It took some adjusting to get the shaft length right and the belt tightness correct, but once you have that done, it works exactly like planned.  It doesn’t get in the way as much as the other slings thanks to the flick-to-disconnect setup on the bungee.  I used mine on 4 long hunts, and I’m hooked (excuse the pun.)

Its bulk means it’s a commitment.  You will have to change your setup to use a harness like this.  After 1-2 hours of hunting, I forgot I was wearing it – even on a hot day – until I disconnected it and felt the full weight of my E-trac!!!   If you want to use a hydration pack you’ll have to get creative or simply wear it on top.

I hope that Minelab releases a revision to this with a cobra/metal buckle and a method to attach hydration and other pack add-ons.   Perhaps somehow integrate MOLLE tactical modular units perhaps?