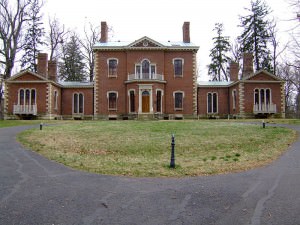 The Henry Clay Estate is a fixture in Lexington, and has a rich, rich history.  Henry Clay was known as  “The Great Compromiser,” Clay (1777-1852) was a noted lawyer, politician and statesman who served three terms as our nation’s speaker of the House and also served as secretary of state under President John Quincy Adams.

A snip from Wikipedia….

“….Henry Clay came to Lexington, Kentucky from Virginia in 1797. He began buying land for his plantation in 1804. The Ashland farm—which during Clay’s lifetime was outside of the city limits—at its largest consisted of over 600 acres (240 ha). It is unclear whether Clay named the plantation or retained a prior name, but he was referring to his estate as “Ashland” by 1809. The name derives from the ash forest that stood at the site. Clay and his family resided at Ashland from c. 1806 until his death in 1852 (his widow Lucretia Clay moved out in 1854). Given his political career, Clay spent most of the years between 1810-1829 in Washington, DC. He was a major planter, owning up to 60 slaves to operate his plantation….”

If you’re in the Lexington area, I strongly recommend a tour.  It’s a great place.  I’m lucky to live just 2 blocks away! 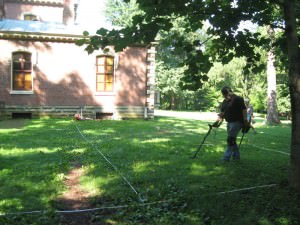 Let me get this out of the way… Ashland is off limits to recreational metal detecting.  My work was done in association with the UK Archaeology Department and the Ashland Estate.

A lot of very interesting archaeology has been done at the site – and there are terrific interpretive signs around the mansion.  Artifact displays are spread throughout the estate as well, all expertly done by various teams since the 1990s.  When you go – take the time to immerse yourself in these displays and imagine yourself living in the early 19th century – when the Estate was on a vast 600+ acre farm!

Ashland plans to do some geothermal HVAC work on the side of the mansion, and Dr. Kim McBride, Co-Director of the Kentucky Archaeological Survey was asked to do some survey work  in advance of the construction.  I was lucky enough to be called by Eric Brooks, curator at Ashland, to give her a hand.  By the way, Eric is the author of the outstanding “Ashland: The Henry Clay Estate” photographic history and is a walking encyclopedia of the Estate and its past!

While sweeping, I was specifically listening for non-ferrous targets and large or unusual ferrous ones.  I used a mild nail-masking pattern on my E-trac to discriminate the tiny iron fragments (e.g. 1/4 of a nail) and the usual quick mask and x/y scanning to try to locate interesting, deeper objects such as full nails, larger iron, lead, copper, brass and such.   As Lexington expanded and the facility became open to the public, the amount of modern objects in the ground increased, so I spent time retrieving clad (modern) pocket change, gum wrappers and copper clippings from the roof and gutters.  Very typical items for a location used so often.   The deeper targets (2-7″) were mostly cut and forged nails, also as expected.  As we got closer to the building,  there was a blanket of them, so I was using my detectors special “two-tone-ferrous mode” near the house to penetrate below them. 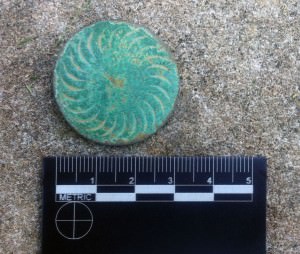 We concluded from the work that the area was likely free from significant features (which might include melted lead, military objects or other evidence of encampments or long-term activity.)   More investigation will be done as construction progresses.

One find was particularly nice… this c1790-1810 copper (and likely British-made) “Dandy” button.  This object’s hypothesized date places it at the very beginning of Ashland’s storied timeline!

It was made of copper and featured a wonderful swirl pattern along with a milder punch pattern in the center.  There was no shank or backmarks, but several of my trusted sources online converged on the date and origins.   It was amazing that this was found as the strata has at least 7-8″ of known fill dirt that was deposited after the second house was built.  Somehow, my detector reached through and noticed this one! 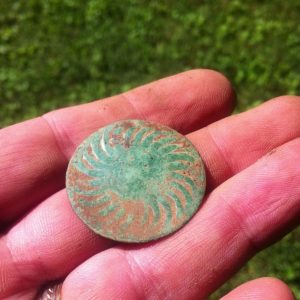 It has, as you can see, a rich green patina after over 200 years in the dirt!   Who owned it?  How did it get to Ashland?    If I find any more information about the pattern, I’ll post it.  For now, the button is in UK’s care and may end up at the Estate’s collection, hopefully where visitors can enjoy it.

*I’ll be looking over Eric Brooks’ photography collection a bit more closely to see if I can spot the button on someone’s coat!

Postscript:  I was unable to say anything about this until now, but National Geographic’s Diggers visited the Henry Clay Estate and the show will be airing Wednesday, August 21st.    Here is information about that.