Thanks to my high rank in Google for “metal detector rental in KY“, I got a call from a farm owner saying that Miguel, a new farm hand on his second day of work, had been throwing hay to horses with his new gold band on his finger.  As he tossed the hay, the ring came off.   Miguel dropped to his knees and his stomach sank thinking it was lost. 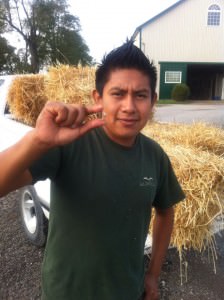 Miguel’s boss immediately asked a friend to come over with a metal detector, but it was a cheap one, and they just didn’t have the experience.  This usually results in people giving up.  Oh I wish I could know of all those cases where people did give up – as there’s lots of lost jewelry in their wake!

We gridded off a spoke-hub pattern from where Miguel was standing using string and a tent stake, and I started detecting in beach mode on my E-Trac with sensitivity turned down…listening for low tones moving around the pattern one slice at a time. 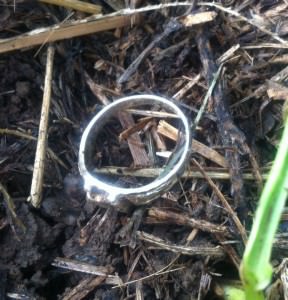 Luckily, there wasn’t much metal in the field.   Miguel had to get back to work (he was on the clock!) so I continued alone.  I could then concentrate.

After 15 minutes,  a solid low tone pushed through the threshold and I knew I had it before I even saw it. Miguel can stop sleeping on the couch.